The first time I saw Mamuli Earrings, was In Branly – Jacques Chirac Museum Paris many years ago, where they display hundreds of Indonesian Antique Ethnic earrings, where some of them are no longer to be seen in Indonesia these days. Luckily, the Sumbanese are very good at preserving their culture and the mamuli ornaments and design are still being made/worn by the people there today.

Here is small information I copied from Wikipedia about the Mamuli Ornaments: They are found in the megalithic society of the western Sumba people, e.g. the Anakalang society. The mamuli ornaments have a shape which represents the female genitalia, symbolizing the woman as the giver of life. Mamuli are the most important Sumbanese precious metal valuables and are seen as heirloom objects which served in important exchange rituals.
By the way, Sumba island is an Indonesian island located in the Lesser Sunda Islands, just to the south of Flores & Sumbawa island.
In West Sumba, the Mamuli design is also applied extensively on their textiles, as you can see on the ikat blanket on this picture. In East Sumba, they also used the Mamuli design on their ikat textile, but in a very different way, usually as large ikat motifs combined with other figures on a sarong or blanket. 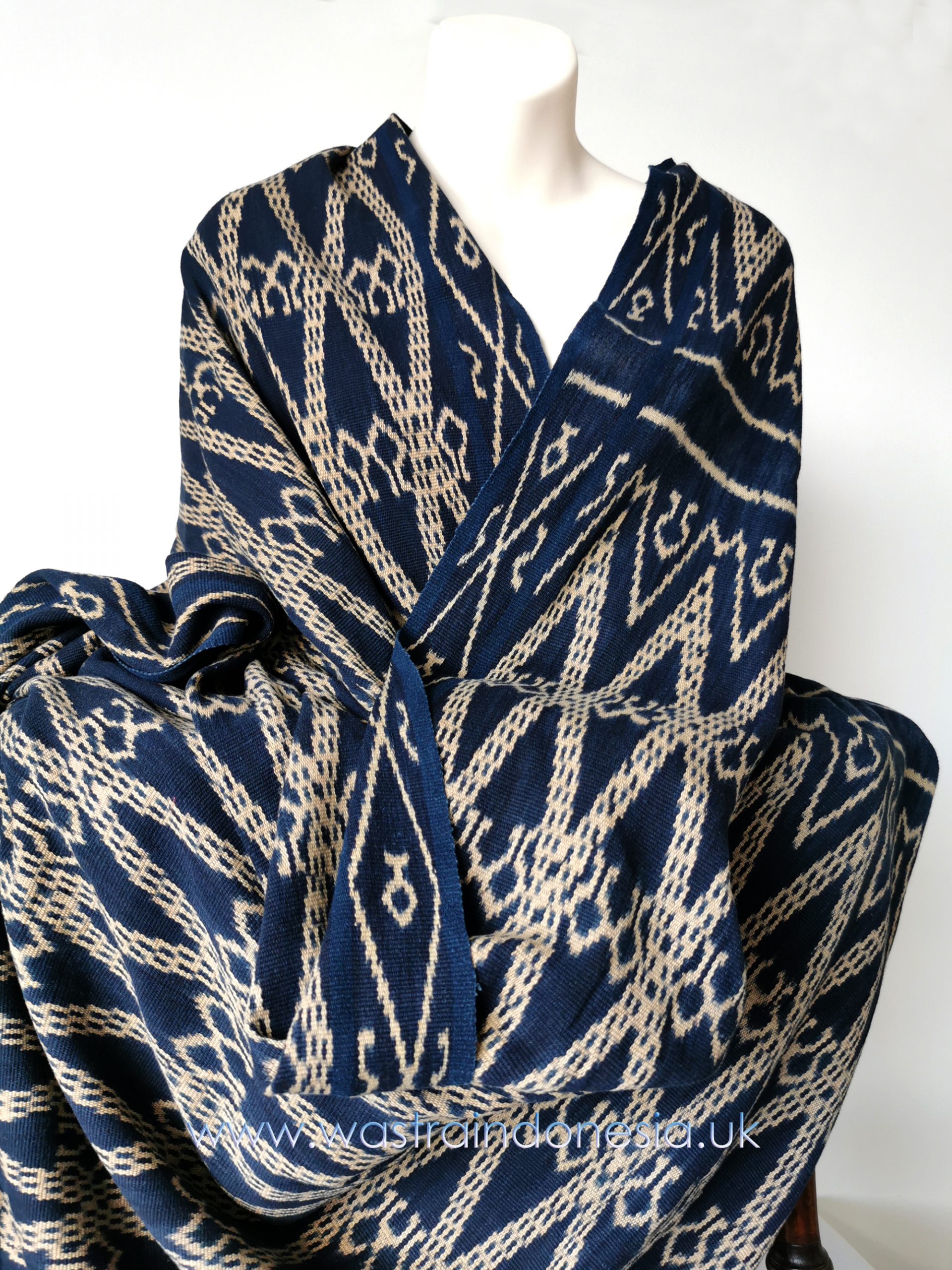 In 2018, I visited West Sumba for the 1st time, and I was absolutely fell in love with their textiles. Before visiting West Sumba, I used to hear people say that West Sumba textiles are not very nice, not like the East Sumba textile. I admit, most of their designs are not as pictorial as that of the East Sumba Hinggi or Pahikung designs, but how wrong people to judge textile arts just by hearing what other people said, I was always very curious about the Western Sumba culture and their textiles, so I had to see it for myself and so glad I did.
We arrived in Ratenggaro Traditional Village on a rainy day but was very lucky to receive a friendly welcome from a very old man dressed in a very traditional West Sumba outfit with his giant machete hanging from his belt, who took refuge from the rain with us in a corner of one of the traditional houses. We chatted a little and later realised that he was one of the Village Heads and his son was the Kepala Desa (Village Official Head, usually appointed by the government). We were taken to his son’s house (inside the traditional village compound) for some coffee and banana fritters, and we felt very welcome. I took this opportunity to talk about their traditional textiles, and then his wife (a very experienced weaver) brought many of their old textiles out, and also demonstrated how to spin the cotton in West Sumba style, this moment was truly priceless for me.
West Sumba is such an amazing place, beautiful megalithic villages, lovely people once you know them (try to respect them and their culture as much as you can), tropical landscape (very different than the dry landscape of East Sumba). Here in West Sumba, you will experience the magical culture of the island. COME TO WEST SUMBA, have a journey that will make you ask a thousand questions after your visit. I blog whenever I can about my visit to weaving villages in Indonesia, you can see my update in www.wastraindonesia.uk
Alternatively, join my Facebook Page update: https://www.facebook.com/indonesiatextiletours/
Thank you for stopping by, hope to take you to see our weaving villages soon. Salam Wastra, xxNelly
Filed Under: FROM SUMBA ISLAND
A visit to Prailiu Kingdom, in Kamberra, Waingapu, Sumba island.

We use cookies on our website to give you the most relevant experience by remembering your preferences and repeat visits. By clicking “Accept”, you consent to the use of ALL the cookies.
Cookie settingsACCEPT
Manage consent

Any cookies that may not be particularly necessary for the website to function and is used specifically to collect user personal data via analytics, ads, other embedded contents are termed as non-necessary cookies. It is mandatory to procure user consent prior to running these cookies on your website.